We think our volunteers are a BIG deal and we couldn’t do what we do without them! We want to acknowledge and celebrate their achievements and impact on our organization, so each week, we hope to highlight a volunteer for you to get to know. Our volunteers mean the world to us! Interested in becoming a volunteer with NEDS? Click Here for more information. Meet Mike Cummings! Mike joined NEDS as a coach sometime around 2010. He doesn’t specifically remember his first lesson, but he remembers very well how he felt. He was nervous, anxious, and during that first season felt like a fish out of water. He felt like all the other coaches were far more skilled and knowledgeable than he was, and that he would never catch up. It took him over a season of assistant coaching to finally start feeling confident that he could handle a lesson. Today, he is very patient with new coaches and empathetic with what they’re going through.

When asked about his favorite moment, Mike replied, “Wow….so many”. He has worked mainly with students with autism and developmental delays. More than a few times, parents started crying at the end of a lesson. He remembers one telling him, “this is the first place where people treat (my son) like he really belongs there, and fits in”. He had one lesson with a big, 43-year-old man with autism who got out once or twice a week to do something outside – NEDS was the option that day. He was quite impaired with no language, poor tone, and slow movements. Together, they went up and down Sass a few times, and Mike guided his movements by skiing backwards and tipping his legs. At lesson’s end, Mike walked him back to the Harney Center and met his caregiver (not a family member). She asked, “how did it go?”. He gave a standard answer, then said he wasn’t really sure because the student wasn’t able to tell him. She said, “well, let’s ask him”. She pulled out an assisted communication device and gave it to his student. He quickly typed out (paraphrasing), “I learned a lot today, including how to initiate a turn and how to control my speed. I really liked riding up the magic carpet……” Mike recalled, “His face didn’t change expression. Mine did. I was stunned. It reminded me, once again, that our students’ exteriors often belie what’s really going on inside their minds. We should never underestimate people because of some disability that hides their true selves.”

When asked for one piece of advice for new coaches, Mike stated, “listen and learn, and be patient”. NEDS coaching can be overwhelming at the start. There is so much to learn.

During quarantine Mike has been keeping active. When he was working from home in Lincoln, he was able to exercise almost every day–something that is much harder when he is commuting over an hour every day. Since he has been back to work in Somerville, his start-up is making up for lost time which leads to long days, but exciting days. And “Cathal’s Covid Cooking Class” has been awesome—He has learned a new skill he never desired, never had, but is glad he has now.

For families who have not accessed the NEDS universe yet, his advice is “take the first step”. Make the call. Drive to NEDS that one time. You’ll keep coming back. This week is a 2 for 1 deal! Meet Courtney & Andy Holub and their dog, Holt! Andy’s first season with NEDS was 2003 and Court’s was 2013. Andy was one of the OG Pre-Adaptive Coaches (PAC), and had to take a break when he went away to college. In 2010 he met Court while both were working at the same restaurant. After leaving the restaurant industry, they had some free time and both started to routinely volunteer with NEDS.

Andy admits that he is too old to remember his first lesson, but Courtney remembers clearly; the student-athlete was a young man who loved Disney Princesses, needless to say, they became fast friends!

To Courtney & Andy, NEDS is like a second family. One of their favorite moments together was their first weekend back volunteering in the winter after they got engaged. To them, nothing really compares to the feeling of being surrounded by hundreds of people who were genuinely happy for them.

When asked about what piece of advice you would want a new volunteer to know, Andy quickly responded “Listen to Terry!” That has got to be a joke! Courtney’s answer was a bit more real in saying to pick a seasoned NEDS volunteer to be your mentor and make them your friend.

Keeping occupied during the COVID-19 pandemic hasn’t been that hard for the Holub’s. They have been working on their newly purchased house, building a vegetable garden and outdoor living space and playing board games. Staying active is important to both of them and they have been keeping busy exploring the running trails through their new neighborhood in Portland and baking, lots of baking. Having a dog keeps them on their toes and active as well like playing fetch and teaching new tricks to their adorable dog, Holt!

Courtney & Andy would like everyone to know that the outdoors are for everyone and NEDS makes sure that all abilities have the opportunity to access them! There are adaptive sports programs all throughout the county, check to see what exists in your own community and consider being a coach! This is Dominic Janssens! Dominic joined us this past winter season 2019-2020 after retiring from his paying job. He wanted to spend some time volunteering and NEDS was the ideal opportunity to be out on the mountain doing something he loves and helping others do the same.

The first lesson for Dominic was assisting a visually impaired skier navigate the slopes. After being a little nervous at first, his nerves quickly disappeared and the lesson became one of his best experiences of the year. They were able to cover a lot of ground on the mountain and cheerfully chatted on the lifts.

Dominics favorite moment his first year volunteering was with a student-athlete with a traumatic brain injury who had not been skiing since her accident 5 years ago. She was determined to ski independently and by the end of the 2 hour lesson, she skied on her own! She was so excited that she exclaimed “I don’t feel disabled right now!” This is what volunteering as a ski coach is all about!

When asked what is one piece of advice you would give to a new volunteer, Dominic says “Just do it! You’ll have a great time, learn a lot and meet many great people on the way.”

Keeping active during the COVID-19 pandemic has not been hard for Dominic. He is grateful for living in a town that he has access to walk, run, hike and bike with his family. Dominic admits that if he wasn’t able to be active during this time, he would be bouncing off the walls!

Dominic encourages anyone of all abilities to get out and experience what NEDS has to offer. Anything is possible and you will be amazed at what you can do if you try and meet great people along the way. 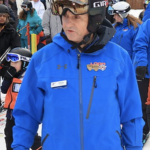 This is Dr. Mike; he has been a volunteer ski instructor with New England Disabled Sports since 2012. Dr.Mike joinedNEDS after retiring from the Loon Mountain Ski Patrol. He was intrigued by seeing the many NEDS student-athletes out on the hill during his time as a ski patroller and his daughter was a peer instructor with NEDS in the Pre-Adaptive Program (PAC).

His first adaptive ski lesson took place on snubber, where he & his co-instructor used the “bamboo pole” to assist the student to ski. Dr. Mike’s co-instructor had a ski fitting issue and needed to leave the lesson to get it repaired. He was a little apprehensive about teaching alone (as this was his first ever ski lesson), so he stood in one spot with the student, engaging them in a conversation until the co-instructor returned! Needless to say, after 8 years, Dr. Mike isn’t apprehensive to teach alone anymore!

When asked what his favorite moment has been so far, he answered: “There are many great moments in NEDS so it’s difficult to select one, sort of like asking Paul McCartney what’s his favorite Beatles song. Recently, my coach partner and I had an adult student-athlete with a visual impairment. She had not been on skis since her vision deteriorated years ago, so she was quite nervous about picking it up at this stage of her eye disease. She did great on the lesson and by the end of the lesson, she had new confidence in her abilities and was expressing her joy with such excitement.”

A piece of advice that Dr. Mike would give to a new volunteer is: “No matter how long we have been coaching at NEDS, it’s a continuous learning process, be it teaching skills or our own personal skiing; we learn from each other. New coaches should know that they are joining a group of volunteers who are accepting of everyone.” #NEDS=family

We asked what Dr. Mike about keeping active and healthy during the COVID-19 pandemic: “During Covid-19, it’s important that we comply with all the public health guidelines. That’s the best way to protect our own health and from spreading it to others. We should not neglect the importance of eating properly, exercising (such as walking or jogging – did you know that Dr. Mike is a runner?), keeping in touch with loved ones and friends, and above all, maintaining a positive attitude and outlook. Except for the eating part – I am the definition of a picky eater – I’m following my own advice.

We Need Your Support!

Volunteer at NEDS
Donate to NEDS

New England Disabled Sports is a nationally recognized program which provides year round adaptive sport instruction to adults and children with physical and cognitive disabilities.